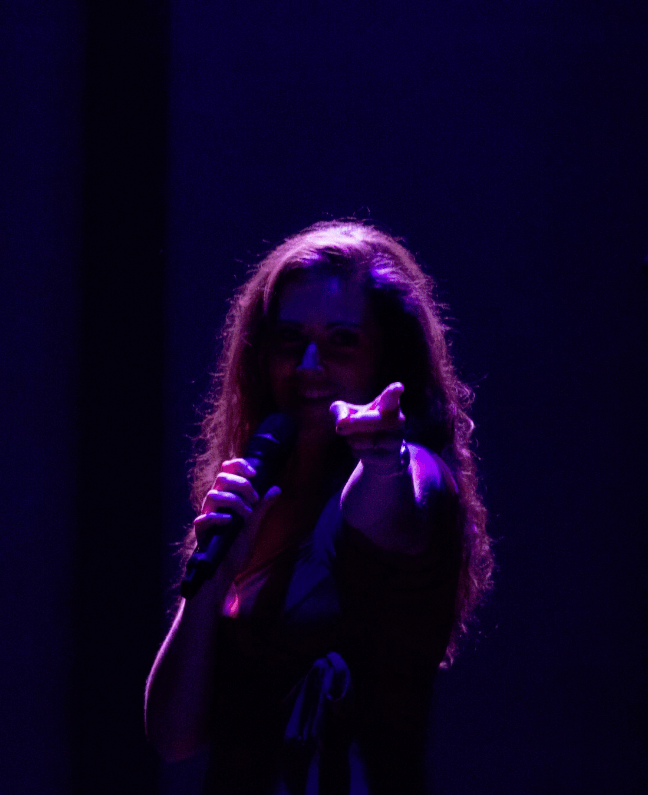 We’re heading toward the closing weekend of EUCMS’ production of Godspell. With many sold-out performances, there are only three chances left to make ’em laugh, make ’em cry, make ’em feel all the feels and sing along in their heads. (Spoiler: there’s lots of catchy material that sends the audience off humming into the afternoon and evening).

It’s been a vocally demanding show, with the ten major principles on-stage for the entirety of both acts. At 2 hours and 15 minutes, that’s a feat of strength (and lots of creative ways to stock up on water: someone just recommended a CamelPac to me yesterday. While I’m sure I’d be well-hydrated, I’m not convinced it would be in-character for Joanne.)

The Husband asked me yesterday: “What’s the motivation for Joanne?” Godspell is a bit of an unusual musical, because there isn’t much plot and character development outside of Jesus’ journey with John/Judas (John the Baptist and Judas are portrayed by the same actor during the show). But the wonderful production team has created a contemporary context for this version, set in a Sydney train station. In fact, the decor and sound design teams have outdone themselves, placing us right in the middle of a train station complete with a working (opening and closing) lift, opal card machine, and atmospheric soundscapes.

And so, with that context, there are ample opportunities to develop characters — even if those characterisations are non-verbal, less obvious, and understated.

The initial direction I was given about Joanne included a few things:

She is a business woman, on the way to work.

She buys in to John the Baptist, immediately and with enthusiasm.

She follows Jesus immediately, and with enthusiasm.

She volunteers for everything, jumping in head-first — almost before knowing what is going on.

She has a specific relationship with another character named Jacob which — through the course of the show — facilitates his inter-personal growth, and allows him to become more engaged with the community.

She is earnest, and heart-felt, and loves participating.

She encourages others to participate. Sometimes this can be by physical coercion (pushing, pulling, grabbing hands, bringing them in), but it isn’t meant to be demanding.

It’s been fun to develop a character who doesn’t really have her own explicit story. Everything becomes much more in-the-moment, much more reactive, much more… real. Sometimes we just show up in our lives without bringing the whole backstory.

Sometimes it’s just strangers on a train platform, figuring out what they’d like to bring to the interaction, and what they might hold back.

This morning, on the bus in to work, a school boy sat down in the seat next to me with a huge cardboard box.

The husband said: “What do you think he has in it? I bet it’s a puppy.”

The boy lifted the lid of the box, and up popped a brown and amber head with whiskers. It was a 19-year-old cat, a covert bus passenger. She barely made a noise when she opened her mouth to meow. She was lovely, and had beautiful eyes, and when the bus stopped to let more passengers on, she crawled over the edge of the box and up onto my backpack in my lap.

“Not in the least.” I have a cat on my lap I didn’t expect to meet on my commute = a good Monday morning. Sometimes there’s not a backstory at all.

Sometimes, there’s just whatever response your heart can offer up.